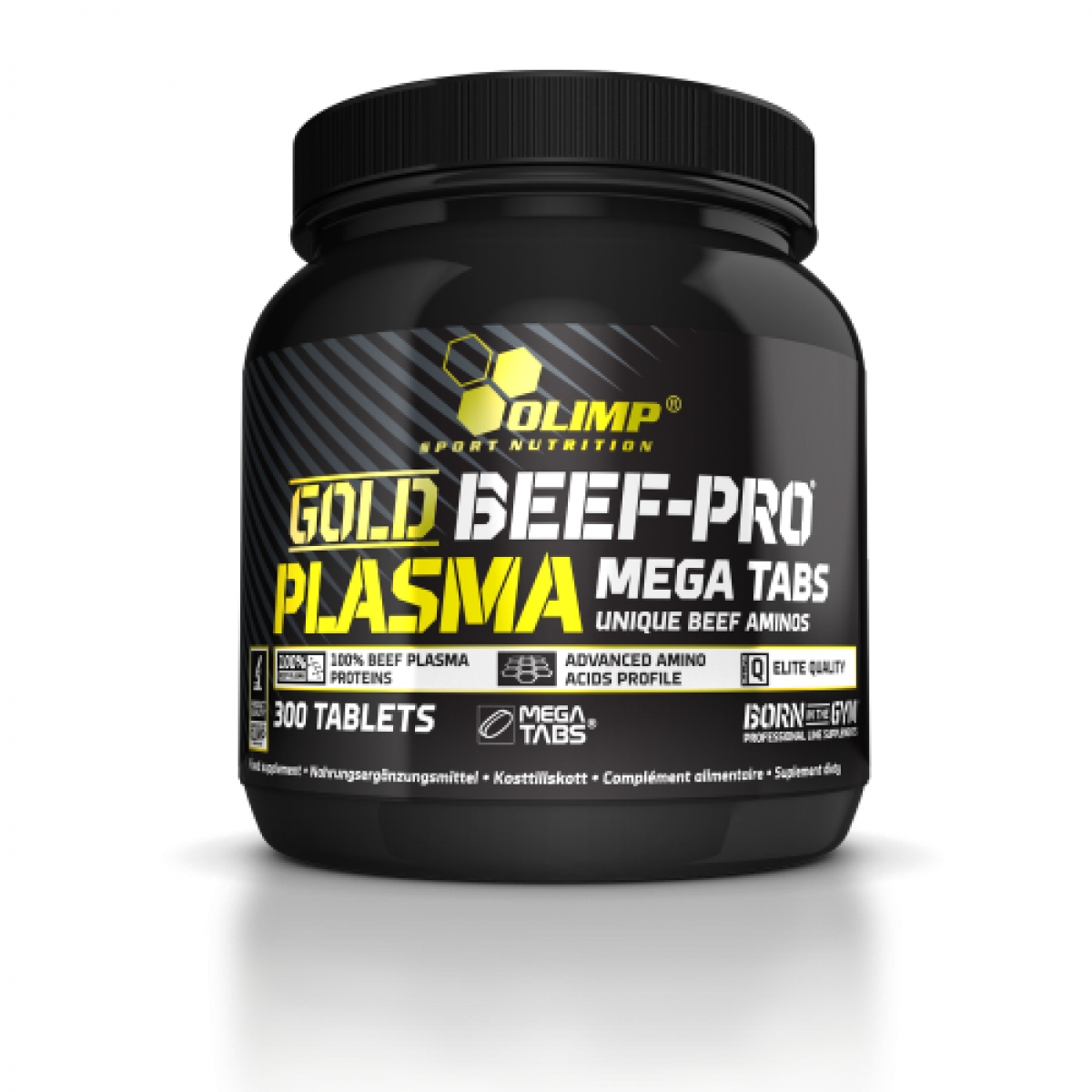 GOLD BEEF-PRO™ PLASMA:
provide huge potential for individuals subject to extremely exhausting physical training, considerably contribute to reducing the inflammation and eliminating dysfunction of the intestinal barrier, improve functioning of the immune system and boost nutrient absorption, considerably contribute to acceleration of tempo and effectiveness of after-training regeneration, shortening time of disturbed body homeostasis and level of endotoxemia in individuals working out hard.

GOLD BEEF-PRO™ PLASMA meets the highest standards set out for high-protein products administered as tablets:
- very high dose (as much as 1750 mg) of highly digestible protein per one Mega Tabs® tablet,
- contains a complete profile of proteinogenic amino acids with significant share of exogenous amino acids (EAA), including branched-chain amino acids (BCAA), displaying highly anabolic and      anti-catabolic activity
- posology was adjusted according to specific body weight,
- the product is lactose-free, therefore it may be successfully taken by individuals suffering from lowered quality of life due to allergy to this nutrient or to milk proteins
- the product has residual carbohydrate (less than 0.5 g) and fat (less than 0.5 g) content per suggested dose.

L-arginine (Arg). 3-fold higher content than in whey proteins. Boosts synthesis of growth factors (polyamines) participating in tissue growth and, as proved in clinical trials, promotes protein synthesis in the body. Together with glycine and L-methionine, it also participates in creatine synthesis

Glycine. Content about 13-fold higher than in whey proteins. Studies on humans (iv) have proved that increased glycine consumption contributes to reduced fatigue and subjective improvement of the quality of sleep.

L-tyrosine. Content about 1.5-fold higher than in whey proteins. Two studies (v, vi) conducted on humans confirmed that supplementation with L-tyrosine is associated with significant improvement of mood and cognitive functions, especially in the period of stress or activity

L-serine. Content higher than in whey proteins. It participates in reducing dysfunctions of the immune system resulting from chronic fatigue (vii), which may be of high importance for people exposed to continuous, highly intensive physical strain which consequently is likely to lead to over-training and any possible consequences stemming from this fact.

L-tryptophan. Content higher than in whey proteins. A 2010 study on athletes (viii) proved that supplementation with L-tryptophan may increase physical strength during aerobic exercise with over maximum anaerobic spells.

L-histidine. Content higher than in whey proteins. Together with beta-alanine, it forms carnosine in the body which is a commonly known active substance contributing to increased muscle strength.

L-phenylalanine. Content higher than in whey proteins. In the body, it may be converted to tyrosine. Thus it becomes a precursor for synthesis of neurotransmitters such as dopamine. Tyrosine administration increases the level of catecholamines circulating in the bloodstream and in the central nervous system, thus contributing to improved effectiveness of physical exercise.